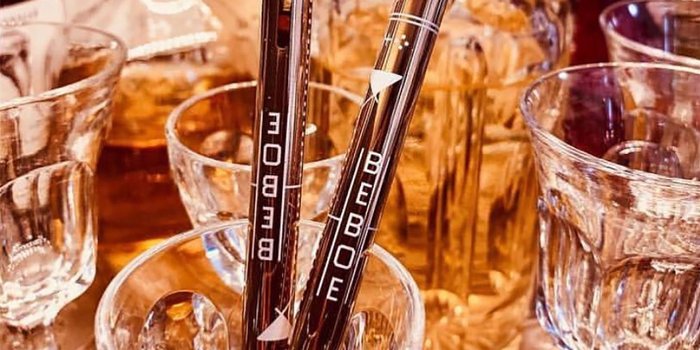 When Scott Campbell and Clement Kwan founded Beboe in 2015, their mission was to create cannabis products that were dosed to go with specific, sophisticated social settings: weddings, afternoon tea parties, and fancy dinners. So they released sleek, elegant vape pens and edible pastilles packaged like something you might find in a Parisian boutique. The classy look got them nicknamed “the Hermès of marijuana” by The New York Times. Clearly, the two were onto something. In March, Green Thumb Industries acquired Beboe for an undisclosed sum, and Barneys New York announced a partnership to sell the products (including a special edition silver vaporizing pen) in its new cannabis lifestyle shop, The High End, in Beverly Hills. We caught up with Campbell to talk about how it all happened.

What did you and Clement Kwan do before you crossed over to the cannabis business?

I have been a tattoo artist since 1999, but I worked on all sorts of other projects and collaborations with brands including Marc Jacobs, Louis Vuitton, Berluti, and Hennessy. Clement has designed strategies behind some of the most pioneering movements in fashion. He was president of Yoox when we met, and he oversaw its merger with Net-a-Porter and was looking for what to do next. We shared a love of weed culture, and Los Angeles was becoming more relevant in the global art market. So we moved to L.A., and I opened a tattoo shop here and built an art studio while we started exploring the landscape of the cannabis industry.

Why did you name the company Beboe?

My grandmother’s name was Be Boe. My mother was diagnosed with cancer when I was very young, and my grandmother frequently visited to help care for her. She cleaned up the house and cooked for us. One thing she did on each trip was bake brownies. She made one tray for us kids and one tray for Mom, but Mom’s brownies were strictly off-limits, kept under lock and key in a closet. Of course, we would go through our rations in 24 hours, turning our sights on Mom’s reserve. We were reminded each time that Mom was really sick and deserved to have her own brownies, and we backed off.

We found out years later that Mom’s brownies were made with marijuana. They would help the nausea brought on by the sickness and bring back her appetite. I laugh every time I imagine that little 85-year-old woman wandering around our local grocer, trying to find someone who could help her buy a bag of weed.

How is Beboe different than other brands?

When we launched Beboe [in 2015], the landscape of cannabis products was very collegiate and juvenile. Customers who were coming into dispensaries were only interested in how high they could get for 20 bucks. Beboe was created for people like us—high-functioning adults who have families and careers and appreciate nice things. I only have time to get high once or twice a week, so, in those moments, I don’t want to waste that time on anything less than the best experience possible. I’m not interested in getting so high that I can’t get off a sofa.

A lot of initial feedback we got about Beboe was about the packaging and design. It’s packaged well, not because a bunch of focus groups indicated that this is what people will respond to; it looks the way it does because it reflects our reverence for what we have made.

Explain what it means that the products are socially dosed.

You definitely feel it. It’s warm and bright and lightens your emotional load a bit, but it is subtle enough that you can use Beboe all evening long and still be present and enjoy yourself.

Was it hard to sell this idea since, as you said, customers wanted as much high for their dollar as they could get?

[It was a big challenge] getting Beboe into dispensaries. We were making something that people had yet to come asking for. We had to really work to convince people, on the retail level, that as consumers became more educated and more discriminating in their tastes, Beboe would be just the sort of thing they would come to appreciate. To overcome this, we put together a persistent and sleepless sales team and focused a lot of energy on education and seeding to open people’s minds to different ways of consuming cannabis.

Your wife is actress Lake Bell. What’s her involvement in the company?

Lake is the ultimate muse and sounding board. She has incredible taste and can give you sincere and thoughtful feedback in seconds. I run most ideas by her before we birth them into the world, and her intuition has had a heavy influence on the products. She doesn’t have an official title within the Beboe world, but within my world, she is everything, so her influence can’t help but permeate Beboe. I asked her if she would make a Beboe educational video in a way that people would actually connect with. She teamed up with [director and producer] Colin Devin Moore, and together they made a brand video in our living room. She is now writing, directing, and starring in a show for ABC [Bless This Mess], but I’m definitely leaning on her talents whenever she has time for more cannabis content.

What advice would you give other entrepreneurs interested in getting into the cannabis space?

Don’t bother unless you truly love the plant. There are a thousand green-rush snake oil salesmen, each trying to put together their own get-rich-quick scheme. But what really prevails and keeps us driven and excited is love and reverence for the plant.