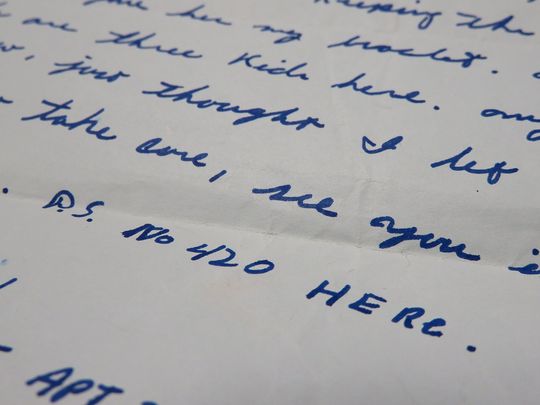 So much has been written and theorized around “420” lore – Is it a police code? Is it a date 4/20? Is it a time 4:20? Is it a state statute (like CA 5150)? Or is it just urban legend? Well, an article was published recently with the purported originators of the term. This is their story, and they’re stickin’ to it.

Pot lore: The true story of 420 told by the stoners who invented it

RENO — The true history of “420” — the global code for marijuana — started with a treasure map, five teenage boys, a rogue Coast Guardsman and a lucky connection with the Grateful Dead. And, of course, some bud.

Canna-­sseurs worldwide have been celebrating April 20 (April 20 equals 420 in date form.) for decades, most of them not knowing why that date specifically was the chosen holiday for stoners. 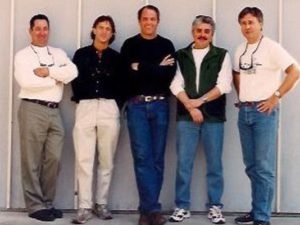 (Photo: Provided by the Waldos via Reno Gazette Journal)

Rumors started that 420 was originally a marijuana-­related police code (even though it never was) or that it was somehow tied to Hitler’s birthday (What?), but it turns out that there’s a more likely, credible story out there.

A group of five men, who call themselves the Waldos, have made it their task every April to set the record straight.

“We had no idea we were making history, it was just an inside joke,” said Dave Reddix, one of the Waldos.

It wasn’t until the 1990s that the Waldos noticed 420 was being used by the masses, far beyond the reaches of where they first coined the term in their hometown of San Rafael, Calif. They reached out to High Times in 1998, told their story and have been gathering more and more proof ever since.

The so-­called evidence dates back to the 1970s, when the Waldos were just a quintet of bell­bottomed wearing, blurry eyed boys.

It was 1971 in San Rafael — a ritzy suburb of San Francisco filled with English gardens and quaint homes, including that of Jerry Garcia and company.

The Waldos then — Reddix, Steve Capper, Mark Gravitch, Jeff Noel and Larry Schwartz — were curious, albeit stoned, adventurers cruising in a powder blue 1966 Chevy Impala and puffing on the devil’s weed.

Nicknamed the Waldos because they sat atop a wall in the middle of their campus at San Rafael High School, they’d impersonate their classmates, teachers, parents; make incessant jokes, call each other Doctor so­-and-­so and spoke in their own dialect of words like “Pfffft zoight!” and “EYOT.”

“We were just friendly, happy, funny guys. And somehow because of that, all these doors opened up for us all the time,” said Capper.

The Waldos also were known for having spectacular adventures, which they called safaris. One time they snuck into a military air field during the Vietnam War and the mechanics ended up showing them an assortment of weapons systems. Another time they went underneath the Golden Gate Bridge and made the painters nets their “personal trampolines.” 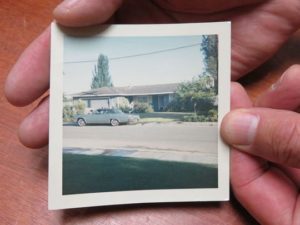 Dave Reddix holds a picture of the “Waldomobile,” a 1966 Chevy Impala that he and his friends used to get stoned in before searching for an elusive patch of pot at Point Reyes, Calif. (Photo: Jenny Kane, Reno Gazette Journal)

“We were seekers. We weren’t the Spicoli stupid stoners.We had a brain in our head, we just liked to get a little high once in a while,” Reddix said.

So it was no surprise that one day, their friend, Bill McNulty, came to them with a map.

The map was a primitive drawing of where the boys could find a patch of abandoned weed out at Point Reyes, a foggy coastal outlet about 45 minutes from their home.

“A couple of guys in the Coast Guard are growing marijuana and for some reason they think that … their commanding officer is going to bust them and they don’t want to be busted so they’re going to abandon the patch, so they’re giving us permission to go and pick it. They made a map for us where it is,” Capper recalled McNulty telling him.

The map had been drawn, in fact, by McNulty’s brother­-in-­law, a man the Waldos later knew as Gary Newman.

“Steve brought it to us and he said, ‘What do you think?’ We go, ‘Are you kidding?’ You know you got five teenage kids looking for free weed constantly and we said, ‘Yeah, it’s a no brainer, let’s go!’ ” Reddix said.

Some of the boys, however, were enrolled in football, so they couldn’t meet until a little after 4 p.m. They settled on a rendezvous at 4:20 p.m. and decided to meet at the campus sculpture of the famous French chemist, Louis Pasteur.

“420 Louis, 420 Louis,” they’d holler to each other in the hallways, a reminder of their after­school adventures to be.

For weeks, the boys searched for the ganja garden of their dreams, marching through the coastal fog, looking for a fragrant plot of pot, but they never did find their treasure.

Even though they couldn’t find the weed, that wasn’t the final chapter for 420. In fact, it was just the beginning. 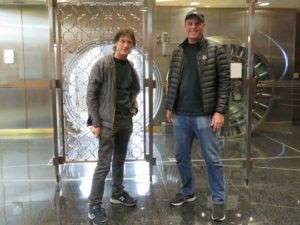 Steve Capper, left, and Dave Reddix have stored away evidence that they invented the term 420 in 1971. (Photo: Jenny Kane, Reno Gazette Journal)

“I could walk up to the Waldos, and I’d go, ‘420,’ and it was like mental telepathy. They would know if I was saying, ‘Are you stoned? Do I look stoned? Do you have any? Do you want to go off and get stoned?’ You could say 10 different things by saying 420 and it was just mutually understood all the time,” Capper said.

The Waldos’ lexicon started to seep elsewhere — first in the high school newspaper and then to the Grateful Dead community, which sounds like a major jump, but not so considering the boys’ connection with the legendary psychedelic rock band.

“My brother Patrick was friends, and still is good friends, with Phil Lesh (the Grateful Dead bassist) and the Grateful Dead,” said Reddix, who ended up working as a roadie for some of the members.

Reddix and the Waldos also would dog­ and house­sit for some of the members, and they even got to hang out outside the Dead’s practices since Gravitch’s father was a real estate agent for the band. He’d not only tell the boys where the band was practicing, but he’d get the Waldos backstage passes to shows.

“We used to listen to them practice, get high outside, shoot baskets, hang out and do goofy stuff,” Reddix recalled.

“You’d smoke out, say 420, and the whole community picked it up,” Capper said.

“Last weekend I had a job as a doorman backstage at a concert. I smoked out with David Crosby and (Phil Lesh) and got paid twenty bucks. Wow, twenty bucks,” read Reddix, from a letter he’d written to Capper when Capper was off at college. “And in this letter, I rolled him a joint, and I stamped it down flat, I put it in there, and put, ‘P.S. A little 420 enclosed for your weekend, Dave.” 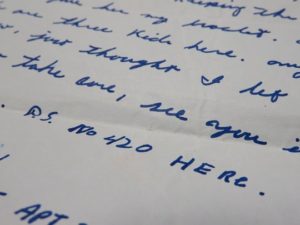 A letter from the 1970s shows one of the earliest uses of “420” by one of the men who call themselves the “Waldos.” (Photo: Jenny Kane, Reno Gazette Journal)

The letters are yellowed, postmarked in the early 1970s and scrawled in the penmanship and voice of high schoolers. The letters talk about weed, and secret missions, tapeworms, genitals and rock ‘n roll.

“These letters, they’re a bunch of stoned ramblings,” Capper said.

The Waldos also have copies of the records of Newman, the Coast Guardsman who made the map. They searched for six years and hired a private investigator before they found Newman, who ended up homeless in San Jose.

Newman confirmed for the Waldos that he’d made the map, and that he’d been stationed at Point Reyes at the time the map was made. The Waldos went with Newman back to Point Reyes, but he couldn’t recall exactly where the abandoned grow had been.

Since legalization has swept the nation, and more than half the states, D.C., Puerto Rico and Guam have legalized pot in either medical and/or recreational form, 420 has become even more popular.

Where marijuana is legal: 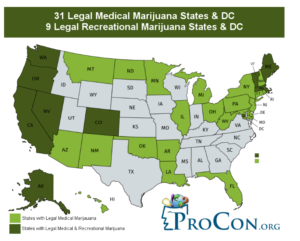 While it is no longer a code so much as a wink, the Waldos are glad to see 420 culture accepted on a larger scale. Still, they want folks to remember what it took to get to this point.

“We never thought pot would be legal when we were kids because you had to do everything underground because we were criminals, outlaws,” Reddix said.

“To be a stoner back in the day, it meant you were part of a brotherhood,” Capper said.

The Waldos have not made any money off their claim to fame yet, but they are co­-branding with Chemistry, a vape cartridge pen company located in Oakland. Their brand is called 420 Waldos 1971 and all net proceeds will be going to the Drug Policy Alliance, a non­profit aimed at ending the “war on drugs.”

The Waldos will be launching their brand at a local dispensary on, of course, April 20.

“We were just at the right place, the right time,” Reddix said.

This article was originally published on USAToday.com on 4-20 2018.